Top 8 Sports You Need Agility For

Are you tired of always being left in the dust by the soccer player you are defending? Or are you getting frustrated by the fact that you can't do the cross-over moves your favorite basketball players easily do in their games? Fret no more! While you can never learn these skills overnight, there is a way for you to perform at your best in your chosen sport. All athletes have the goals of moving faster and being stronger, but they always forget one specific skill that will help them reach their optimum performance. That skill is agility, the ability to change directions without greatly decreasing your speed.

When it comes to workouts, many players spend too much time on running drills, cardio exercises, and weightlifting training. Of course, we are not saying that these are not that important in sports. Every type of training targets specific areas in your progression. When training your body, it's vital that you do a bit of everything, instead of focusing on just one area. However, including agility training in your routine will absolutely bring your development on another level. Agility combines a number of skills to the equation: balance, strength, coordination, speed, and reflexes.

So if you are a basketball player, a gymnast, an aspiring member of your football team or just a fitness enthusiast who wants to squeeze in an hour of workout at home, developing your agility is the way to go! Don't make the same mistake of skipping agility training like what other athletes do. Are you wondering if your sport requires improved agility so that you can be at the top of your game? Do not worry, we have the answers covered for you. Here is the list of the top eight sports you need agility for. Take the time to find out if your sport is included, and always remember that there is no impossible goal if you are willing to put in the hard work!

There's more to soccer than the ability to endlessly run fast without easily getting tired. It requires you to move in just about every direction, making split-second decisions with the ball along the way. There is no question that speed is greatly needed in soccer. But if you are not agile enough, you won't be able to get by your defender or close out and steal the ball from the opposing team's striker.

Agility training will help improve your foot speed, as well as your balance. Balance gives your lower body the strength to quickly change directions, a very important skill in soccer. Marking a striker or a midfielder requires you to shuffle your feet. Through agility training, you can increase your lateral quickness so that you can keep up with the movements of the player you are marking.

But how about goalkeeping? You won't need agility for that because you just have to anticipate where the ball goes, right? That's a very wrong train of thought. Agility is not about moving your feet. Including agility drills to your workout routines will also increase your mind's reaction time and perception. That just means that your reflexes will greatly improve, allowing you to correctly anticipate which direction the striker hit the ball. With your quick reflexes and the foot speed and lateral quickness that you developed in agility training, you'll be able to get to the ball and prevent the opposing team from scoring.

Unlike team sports and the exception of a doubles match, racket sports like tennis, badminton and table tennis only require two players to compete against each other and play the entire game. This means that the players have to exhaust a lot of energy as they have to do everything by themselves. But the important thing to remember if you're a racket sports player is that it is a game of movement. Take the game of tennis as an example. The tennis court is actually a very wide field for a single player to cover. A drop shot or a smashing hit from an opponent will require you to go from one end to another, a difficult thing to do if you don't have these two skills: a dynamic first step and the advantage of having quick reflexes.

While agility training can cover those two skills, it can also target the development of a specific area of your body: the hip flexor. There are a variety of agility drills that you can do to strengthen your hip flexor. This will give you core stability and will allow you to be more flexible in aggressively changing directions, something that is needed in scoring in a tennis game.

American football is one of the most complex sports in the world. While the goal of reaching the end zone to score a touchdown is easy to imagine, there are lots of difficult plays and strategies to know before you can actually play the game. For one, the unique positions that each football player is assigned are really different from one another. But there is one skill that is a common necessity for each aspiring player: the ability to be really agile.

For example, we all know that the working chemistry between a quarterback and a wide receiver is very important for a team's success. They may differ in the roles they play, but they both need to work on their agility so that they can connect for a touchdown. The quarterback has to exercise quick reflexes and eye-body coordination so that he could see through the play and pass the ball at the exact right time. On the other end, the wide receiver has to have an explosive first step to quickly change directions to elude the blockers. If you want to play in the NFL in the future, you might want to focus on your agility training.

Arguably the most popular sport in the world, basketball is a game that requires all sorts of physical abilities. While height is definitely an advantage, basketball players always rely on a number of skills such as shooting, dribbling and defending. To be more effective on the court, NBA players usually do a lot of agility drills on their workouts. Let's take the art of shooting as an example. While shooting is more of muscle memory, you also need lower body strength and balance so that you could lift off with ease. Remember that the flow of shooting the ball starts with the knees, not on your arms. Your arms and the flick of your wrist only act as support, but it is in your legs that you get the needed strength when you go for a jump shot.

Since agility training focuses on the stability and balance of your legs, it would also increase your basketball-related attributes such as your vertical, lateral quickness, and acceleration.

While speed and endurance are the two skills given the highest priority in running, that doesn't mean that track and field athletes don't need to work on their agility anymore. In fact, they do a lot of it. Always remember that one way to improve your endurance is to learn to be efficient with your movements. Through agility training, runners can eliminate any stiffness in their joints so that they won't have to exert too much effort in running. Also, there are other track and field events aside from running. A great example is throwing, where the players have to exercise great agility so that they can maintain an accurate throwing position without getting outbalanced.

As we all know, combat sports like boxing and taekwondo is all about protecting yourself at all times while also maintaining an attacking position so that you can score a punch or a kick to your opponent. One of the most difficult skills to learn as a boxer is to make a lot of quick but controlled movements around the ring. A wrong step of his foot or just a bit of a slip will put a boxer in an open position to be hit and possibly be knocked down. Another important boxing skill that is targeted by agility training is body coordination. All of the great boxers display excellent coordination of their hands and feet. While in an offensive position, a boxer releases a combination of three to four punches while also having the quick reflex of evading the opponent's possible counterpunch.

It's true that volleyball players don't move as much as soccer or tennis players do, but they exercise a lot of agility when they are going up for a spike or sprinting to chase a loose ball. Without agility training, the spikers or the blockers won't have enough explosiveness and vertical in their leaping ability. A lot of injuries like pulled hamstrings or pain in the knees happen when an athlete repeatedly jumps high but he doesn't have the necessary lower body strength and flexibility to carry his weight and absorb the impact upon landing on the floor. Similar to goalkeeping in soccer, agility training will also improve the reflexes and anticipation of a receiver while also giving her enough strength to receive the spiked ball and return it to the other court in one fluid motion.

Gymnasts should be included in the list of the most agile athletes in all sports. People forget that agility is flaunted through grace and fluidity in movements, and gymnasts greatly possess those two attributes. But gymnastics is not just about the art of balancing your body. A gymnast has to strengthen her feet and legs, which will prevent her from slipping or sustaining an injury. Agility workouts build up the strength and balance on their legs, stabilizing their body and allowing them to assume a standing position after high flips in the air.

So, if you're into the world of sports or just an avid fitness junkie, having an improved agility will absolutely optimize your performance! Do you want to take on the streets to show off your basketball skills? Or are you planning to go to the field to give soccer a try? Then the ZOID AcademyFitness Agility Trainer is the way to go!

If you are curious and determined to try how agility training can optimize your overall performance, you can visit ZOID Academy to learn all about it! With over hundreds of specific exercises and drills to work out your agility and flexibility, we can assure you that you’ll never regret the moment you decided to choose ZOID. The site even has a number of tutorial videos of agility drills that you can follow! With twelve trapezoid-shaped pieces, it is unlike any other old-school agility ladders. The best part of it is that the pieces can be separable, so you can form an "S" shaped configuration or a circular one to give a whole lot of variety on your agility training!

More importantly, you can use the ZOID Fitness Agility Trainer on just about any surface. So if you are into football, basketball, tennis or just doing basic workouts at the comforts of your own home, you can use this training tool to work on your explosiveness, while still being flexible enough to absorb the impact. Players, trainers, coaches or gym owners, visiting getting the Movements and Drills page is the right thing to do! 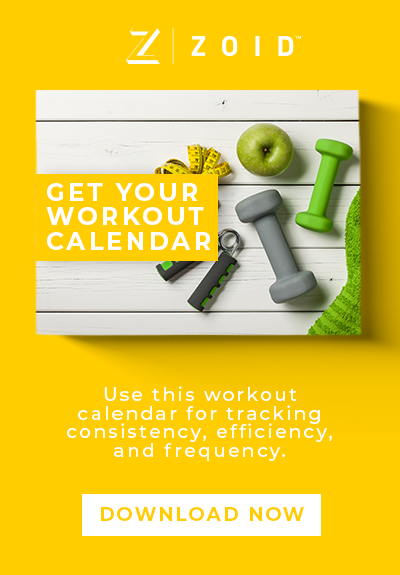